Ted the online slot is a themed after the movie under the same name, “Ted”. Very few online casinos possess this online slot, games.williamhill.com being one of them. The game is simply with just 5 reels and 20 paylines and very few special features, but the graphics are ultra-modern and look nothing like your average slot game. It takes a little time to accustom to the new style of buttons and their place. For example, the play button or lever looks like “reload” symbol we often see on internet navigation systems and the betting values are located on the left side, not the center.

What stands out about the Ted slot is Ted itself, the funny and politically incorrect teddy bear will be ever present outside of the reel and will chat with you every now and then with some of its famous rude phrases, he even farts.

Blueprint Gaming is the developer of this 5 reel and 20 paylines slot. The game features 6 randomly triggered base games and 5 main bonus features like free spins and a cash prize of 500x your stake.

This online slot is playable on desktop, mobile and tablet, by its structural design it looks aimed for mobile users mainly. Bet sizes go from 2£ to 200£ per spin.

There doesn’t seem to be a storyline as the entire scene seems to be Ted’s living room. Ted idly remains lied down with a TV remote as you spin your game with symbols representing characters from the movie and icons that represent Ted like alcohol, a bong, duckers and his girlfriend.

The Ted logo appears stacked and pays out 25x your stake.

The Wild Symbol is Ted and pays 25x while substituting for any other symbol except the scatter which is the Thunder Buddies Bonus symbol.

The game includes 6 randomly triggered Ted Modifiers that trigger when Ted wakes up during any spin. 1 of the following bonus rounds will begin.

This symbol appears often and can trigger 5 bonuses. 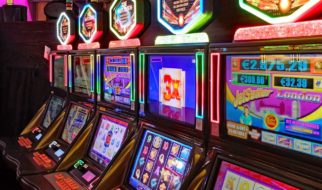