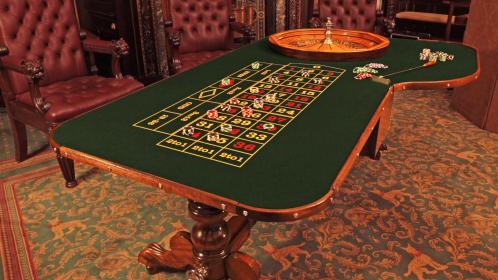 It was the era of prohibition, Al Capone and the Chicago mob. In the backstreet gambling dens and speakeasies of Chicago there were fortunes being made . . . and lost.

One of the quickest ways to lose a fortune would have been to play on this roulette table. It was fitted with hidden buttons that interrupted the spin of the ball, allowing a crooked croupier to fix the game.

The rare table, uncovered by a games company owner from Guildford, was almost certainly built to order for a mafia gambling den at the height of prohibition, when alcohol was banned across the United States.

Gangsters such as Capone controlled a network of clubs where the big hit of the era, Ain’t Misbehavin’, was the backing track to the click of the roulette ball and the clink of liquor glasses.

Alexander Walder-Smith discovered the table’s secret when it was dismantled for restoration. He bought it in Cedar Rapids, Iowa, from a man who had stored it in his barn for decades.

He said: “I just thought it was a very nicely made roulette table from the 1920s or 1930s. It was only when my restorer called to say he’d found batteries that we realised there was anything unusual.”

Stripping off the worn green baize exposed a series of concealed channels for wires. They led to two pressure pads and two push buttons disguised as screw heads.

The batteries, dated 1931, were long dead but a modern replacement revealed that when the buttons were activated, two tiny pins shot out of the channel around which the ball spins before falling down into the roulette wheel itself.

By controlling precisely when the ball fell, the croupier could increase the odds of it landing on a particular number, red or black.

Mr Walder-Smith: “I haven’t found anyone who has even seen one of these rigged tables although they have heard of them. It would have been almost impossible to spot without taking the table to pieces. The batteries were concealed in one of the legs and changing them would have been a major operation.

“They had used newspaper to pad them. They were all local Chicago papers dated between 1928, when we think the table was built, and 1931 when the batteries were last changed.”

The table was in use when Capone’s Outfit controlled the Chicago underworld. On February 14, 1929, his gunmen murdered seven members of the rival North Side Gang in the St Valentine’s Day Massacre. He was prosecuted for tax evasion in 1931.

Mr Walder-Smith paid $5,000 for the table and has now sold it to a wealthy collector, whom he says bought it for its novelty value and has promised not to use it to fleece his friends.